Developed by IED Invest with financial support from FFEM (French Fund for World Environment) and EEP (Energy & Environment Partnership) Mekong, IED provided project management assistance and project management for this gasification plant which makes it possible to recover wood waste from logging operations in the region.

The target capacity for this first installment was 600 kW. But following the commissioning of the first gas generators and an optimization work carried out in collaboration with the local manufacturer, the unit capacity of the gas generators could be increased to 250 kW (against 150 kW initially), while reducing the rates of tars in the gas produced.

As a result, given the power generation capacity (700 kW), only three out of four gas generators are operated in parallel to date. In order to value the totality of the gas production capacity, IED Invest has decided to add 3 generators and to double the existing lift station. The goal is to reach an installed capacity of 1 MW.

The first tranche of the Sra Em plant has been fully operational since March 2018, and to date more than 2 GWh have been injected into the national network operated by EDC. The commissioning of this plant, located at the end of the line, has improved the voltage plan in the area while allowing EDC to allocate more power to other departures of the source station that were previously unloaded.

Expansion of the engine room began in mid-July, and contracts with generators and substation suppliers are being signed. The ramp-up to 1 MW is scheduled for October / November 2018. 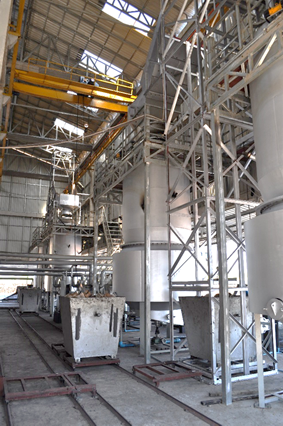